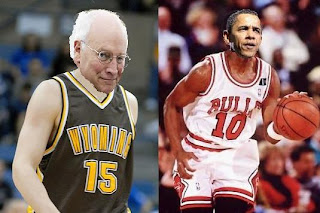 WASHINGTON, DC - (@The Comedy News) - During a pick-up game of "Presidents vs. Vice-Presidents" basketball at the White House, a late-game scuffle between President Obama and former Vice-President Dick Cheney ended in heated words, fists, and an ejection.

With the score tied at 54-54 and less than a minute to play, President Obama took a pass from former President George W. Bush, drove it to the lane and dunked it over Vice-President Cheney.

Words started to fly between the two as Obama hung from the rim, audibly gloating to Cheney by yelling, "yes we can!" At that point, Cheney gave Obama his trademark retort, "go f%$k yourself".

Obama then stood off in Cheney's face, attempting to provoke the Wyoming native. Bush Jr. had to physically restrain Obama and reminded him, "there's no need to get snippy".

A very confused Al Gore thought Bush Jr. was attacking the current President, so he seized on the opportunity to give his former election opponent a right hook to the face. Gore's haymaker, however, went awry as Bush Jr. soundly ducked the incoming punch, resulting in Gore punching Obama in the lower lip. The laceration required twelve stitches.

The head referee, Chief Justice John Roberts, was intent on restoring order to the basketball game immediately. He issued two technical fouls, one on Obama, and the other on Vice-President Gore for accidentally punching the President.

Concurring with Chief Justice Roberts was Associate Justice Antonin Scalia. Following the technical fouls, the referees held that ejecting Obama was "necessary and proper" to the game.

According to Vice-President Dan Quayle, Obama instigated the ejection by reportedly mouthing off about Chief Justice Roberts flubbing the Presidential Oath on inauguration day in 2009.

A dissenting opinion on the ejection was written by the newest member of the Court and most junior referee, Justice Elana Kagen.

The rosters for each team were as follows: