Jobs:  America  Is Ready for A Black iPhone to Lead, Change 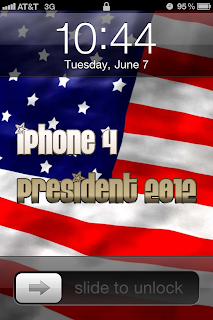 SAN FRANCISCO, CA  - (@TheComedyNews) - Apple CEO Steve Jobs announced today that the black iPhone will run for President of the United States in 2012.
"The black iPhone is more popular than ever," announced the 56-year-old Jobs at the keynote speech at the Apple World Wide Developer Conference.  "It is time that we take the American Presidency into the digital age.  So today, I am proud to announce that the black iPhone 4 featuring the iOS Chief Executive 5 operating system will be running for President of the United State of America."
The Apple CEO went on to describe how a series of Apps will be able to handle each and every one of the tasks of the Presidency.

One such app, called "Bullshit Speech", is an application that has users type in various aspects of an event (location, crowd type, honorees, day, time, weather, local sports team, local unfortunate citizen triumphing over adversity, campaign slogan of the day) to generate a fluffy keynote speech in seconds.
There has been no announcement of whether the white iPhone will be making a bid for President.
Steve Jobs has been tapped as Chief of Staff and Press Secretary for the black iPhone's bid for President---and will be doing all of the work remotely using an iPad.
Jobs has said that the iPad will be not be running for President due to its larger, cumbersome size.  He noted that "now that the iPhone is in the election mix, if iPad runs for President, it will be seen as just the next William Howard Taft --- big fat ass that comes from Ohio."  The iPad is sometimes regarded as an enabler to lazy-ass couch-potatoes since its advertisements always feature someone in socks reclining while using it in front of the TV.
Apple declined to mention how the black iPhone will fare in battle ground states such as Pennsylvania, Wisconsin, and Ohio, but Jobs did remark that, "America is ready for a black iPhone to lead, and change America into a better, more intuitive, colorful, touchscreen nation."
In a written statement for the black iPhone description on Apple's website, it is noted that political parties are obsolete these days.  It's going to be 2012, and republicans and democrats won't be able to compete with the power of the new party, the Apple party.  [The Apple Party] is taking over faster than the Tea Party at a Sarah Palin rally.  The big difference is that the Apple party will thrive on innovation, technology, and facts.
In a straw poll of people likely to vote on election day in 2012, President Barack Obama still led the field of candidates challenging him for President, with the black iPhone in a close second:
Barack Obama (Democrat):  65%
Black iPhone (Apple):  20%
Bowl of Cheerios (Republican):  9%
Mitt Romney (Republican):  6%
Sarah Palin (Republican):  +/-0%