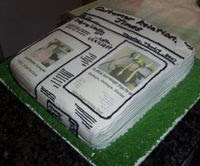 The invitations instructed the over 300 guests to, “Come Celebrate the Big Six-Seven With Carl, But Don’t Tell Him, It’s a Surprise!!!”

One of the invitees, Bob Woodward took that invitation as an opportunity to be the whistle-blower on a potentially huge news story. He initially broke the news by creating a ‘breaking news’ email alert with the Washington Post.

However, Woodward used his journalistic integrity to conceal the identity of his sources for the tip that led to ruining the surprise birthday party. The code-names he used for his sources, which presumably are just Bernsteins’ family members who sent the invitations, were Money Shot, Philly Fakeout, and Angry Dragon.