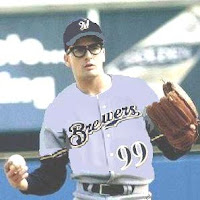 Rick "Wild Thing" Vaughn Called Up To Majors, Expects to Be "Winning"

MILWAUKEE, WI - (@TheComedyNews) - To further their chances of winning their first World Series championship, the Milwaukee Brewers have brought a 46-year-old fastball ace to their active roster.

Rick "Wild Thing" Vaughn, record-holder for fastest pitch ever thrown in Major League Baseball-- 116 miles per hour, joins the Brewers as they close in on their first World Series berth since 1982.

"We are confident that Wild Thing has still got what it takes to win games in the 9th inning," said Manager Ron Roenicke.

Concerns have mounted about Vaughn's ailing astigmatism.  He has gone through at least twelve grades of thicknesses with his glasses over the past year, according to one of his female escorts.

In addition to appearing in the MLB post-season twice, Vaughn has also been a member of the California Penal League baseball organization twice.  The first stint in the clink was in 1988 for grand theft auto.  Vaughn's most recent season in the famed prison baseball league was due to cocaine possession, prostitution solicitation, and attempted torture on television charges.

Many baseball fans in Milwaukee remember Vaughn for his rousing hard rock entrance song, "Wild Thing", late in close games.  Although he hasn't played an inning of baseball since losing the World Series with the Cleveland Indians in 1994, Vaughn sounds like he's up for the challenge.

“Winning, anyone?" Sneered Vaughn, while sawing a shotgun in the Brewers clubhouse.  "Rhymes with winning.  Anyone? Yeah, that would be us.  Sorry, man, didn’t make the rules. Oops!”

'Winning' in the true sense, and whatever coked-out sense Vaughn was blabbering about when interviewed for this story, is a certainty for the Brewers now that they have such a motivated comeback-kid on their roster.