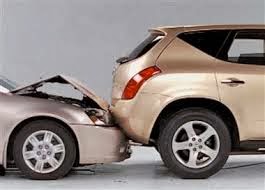 "Unfortunately, we have no fatalities to report," Kraus reported from the scene, as a family of four were being pried from their mangled, still burning Dodge Caravan.  "...which is quite surprising, since with a wreck involving so many people, the law of averages would dictate at least one dead person here.”
With a cameraman in tow, Kraus slyly walked under the police tape to get a closer look at the horrifying scene.   While his new perch did not provide the best camera angle view of the wreckage, Kraus seemed much more intent on finding someone who could still be pinned under the pile of twisted metal and rubber.

"Yoohoo, any dead dudes up in here?"  Kraus smirked as he called out to any potential deceased victims.  "C'mon, I'm on deadline, seriously.  Anyway, still no fatalities to report at the scene, but lots of wreckage.  Fire, and definitely some children involved."

Kraus' report continued until most of the most distorted debris had been cleaned up.  However, he died later that evening after a failed attempt to cross the freeway's oncoming traffic back to his newsvan.

Written by The Comedy News
Category CALIFORNIA
Email ThisBlogThis!Share to TwitterShare to FacebookShare to Pinterest