PYONGYANG, NORTH KOREA - (@The Comedy News) - Kim Jong-Un, the presumptive heir to the North Korean Supreme Leadership throne, has kept quiet about his previous career as a Hollywood actor.

"Kim Jong-Un can neither confirm nor deny his role in the 2009 Oscar-nominated film, Up," announced Kim's publicist, William Morris.

Entertainment writers have long-speculated that Kim did indeed play a supporting role in the film Up as Russell, a portly, jovial young kid with father issues that latches onto a senile old man named Carl Fredrickson--played by former Penn State football coach Joe Paterno.

Coach Paterno has also refused to comment on his role in the critically-acclaimed film, Up.   (SEE STORY)

According to IMDB.com, there is no listing for Kim Jong-Un's brief acting career---most likely due to threats stemming from North Korean officials.

The rumor going around Hollywood has been that even though Kim's late father, Kim Jong-Il threatened producers to cast his son in the film Up, he also required producers to expunge all records of his son acting in the film---promising a nuclear holocaust upon the Western Hemisphere for noncompliance---excluding Canada, though, because hockey and curling are now the fastest growing sports in the Democratic People's Republic of Korea.

Still, the 28-year-old Kim's publicist is ambiguous with his statements about his life before politics.
"Let's just say, hypothetically, that Kim was an actor, arrrrright?" The publicist continued, as several large guns appeared pointed at his head.  "Let's say the young Kim was indeed a 245-pound jolly jelly-belly cream-puff fluff-muffin son-of-a-little-bitch actor with a smile as big as China---would you honestly think that at a time like right now, when his father just passed away, that he would start hogging the all the media attention?  C'mon!  You media-types are simply cruel, and you must be eliminated." 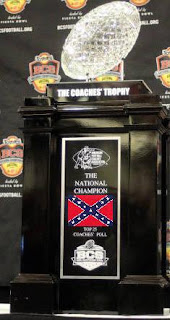 ATLANTA, GA - (@The Comedy News) - The Board of Directors of the Bowl Championship Series (BCS) organization, the entity responsible with crowning the National Champion of college football every year, has decided to add the Confederate Flag to the BCS trophy.
"After reviewing the past fourteen match-ups for the BCS National Championship, we have come to conclude that winning the National Championship in football is primarily a southern tradition," explained a BCS spokesman.  The trophy belongs in the south, and what better way to commemorate the south's connection with college football triumph than to put the Confederate Flag right on that trophy."
Many critics see the move to add the historic emblem to the BCS trophy as more evidence that the BCS panders to the southern and bible-belt regions of the country.
"The re-match of #1 LSU Tigers and the #2 Alabama Crimson tide in the 2012 National Championship game is clear evidence that the south gets special treatment when it comes to football rankings," explained the chairman of the Cousins and Uncles of Union Pacifists Foundation.  "Honestly, f#!k it, I don't even care anymore.  It's not about football anyways, it's all about selling corporate slogans."
The facts show, however, that non-ex-Confederate states do not fare well in getting to the National Championship game.  The only Union states that have appeared in the big game are Oregon, Ohio State, and USC.
Still, the BCS stands by its move to put the Dixie flag on the National Championship trophy.  "If it were the other way around, if the Union states were winning championships left and right, we would consider putting a chai tea latte, a high school diploma, or Bruce Springsteen face on the trophy," explained the BCS spokesman.  "Until then, the BCS shall recognize that the South has risen again."
Subscribe to TheComedyNews.com on Facebook
Follow TheComedyNews.com on Twitter
Written by The Comedy News
Category SPORTS
Email ThisBlogThis!Share to TwitterShare to FacebookShare to Pinterest 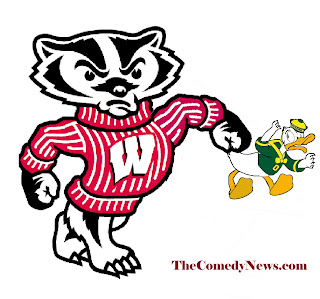