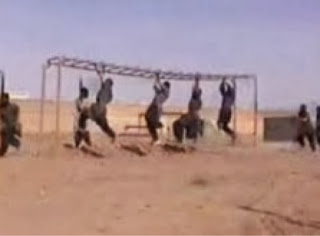 Not much is known about the obstacle course that Al Qaeda requires of all of their terrorists before graduating.  There have been murmers of discontent amongst many rank-and-file terrorists that the western news media have been using the same 20-second video clip featuring terrorists training on monkey bars.

For the past decade, a referendum on upgrading the monkey bars and the rest of the terror school obstacle course has not reached the required majority from Al Qaeda members at their annual convention,

"This is an investment for the future of Al Qaeda--- stronger terrorists with more upper-body agility", the press release concluded.

The new monkey bars are planned to have a moat of alligators beneath to quickly weed-out any scronny terrorists in training.

As of press time, a United States Navy drone is headed in the direction of the Bin Laden Memorial Training center to bomb that dump into oblivion.