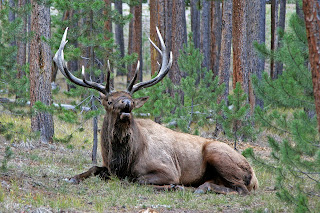 YELLOWSTONE NATIONAL PARK, WY - (@TheComedyNews) - While many people thorughout the United States are furious about being furloughed from their Federal Government jobs, there are billions of animals who are taking their share of joy.

Due to the Federal Government shutdown, all National Parks are closed to tourists, leaving billions of diverse wild animals free of gawking tourists invading their habitats.

"I can hardly remember the last time I was this relaxed", a Yellowstone Elk rejoiced.  "I'm a three-year-old father of seven.  I used to worry every day that a dumb family from Wisconsin will run over one of my children with their Subaru.  Good riddance!"

A similar sentiment was expressed by Bryant, a two-thousand pound grizzly bear..  "No matter how many people we gore each year, tourists keep coming back.  It's really annoying.  But just one government shut down and bam!  All intruders to our neighborhood are gone.  Now I can go fishing for lox and dumpster diving without annoying tourists shooting sepia-faded Instagram photos of me."

In addition to the natural fauna at the closed National Parks, the flora are pretty amused by the lack of tourists and researchers as well.

"Look at me, I'm 5,000 years old,.  Have I been waiting for a time that all the scientists would just fuck off for a few days?"  A Redwood tree in Northern California at the eponymous National Park snapped while smoking a cigarette.  "You bet I have.  You try to germinate while some dork in short shorts and tubesocks takes measurements of your dong."

Still, there is some wildlife that misses the daily drudge of human contact.

Damien, a Burmese Python at Everglades National Park expressed his insistance that the parks open up to tourists once again.

"It's not that I enjoy harming humans," Damien explained.  "Me and my buddies just like to scare the shit out them.  'Snake!  Snake!  Snake!'"  Damien mocked.  "Man I miss that shit."

Written by The Comedy News
Category ANIMALS
Email ThisBlogThis!Share to TwitterShare to FacebookShare to Pinterest