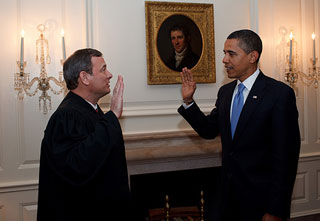 "Barack has called me every night since inauguration day," said a relieved Chief Justice Roberts.  In a high-pitched mocking voice, Roberts quoted the President's harassment: "'Hey John, repeat after me... faithfully execute the Office of President of the United States.  Say it!  You overpaid pension pirate!'  You hear that?  The President called me a pension pirate."

At inauguration in 2009, Chief Justice John Roberts, while administering the constitutionally-required oath of of the Presidency, mixed up several words.  Out of caution, the President and the Chief Justice re-administered the oath at the White House a few days later.

"I have been looking for ways to make peace with the President," Chief Justice Roberts said.   "After all, I really f'd up. I work like three months a year---behind closed doors---with a bunch of bookish curmudgeons.  But somehow, I managed to mess up the one thing I have to do on international live television.  So to make it up to President Obama, I voted to uphold his Health Care Reform Bill.  By doing this, not only will Barack be happy with me for the first time, but it will also give me another shot at administering that tongue-twister of an oath to Obama on January 20, 2013."