CHICAGO, IL - (The Comedy News) - Most people know that as a fan, there is not much they can to to affect the outcome of a sporting event from the stands. In most instances, fans have run onto the playing field or scream at the top of their lungs during a key point of the game to make a difference. For the upcoming Bears-Packers NFC Championship game this Sunday, fans of both sides are thinking of ways to ensure a victory for their team. 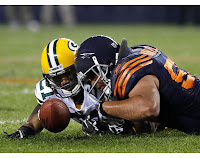 1) Pretend that everything with cheese on it is just a part of another obscure Gino’s East of Chicago Pizza.

2) Putting a Bears hat, mustache, and beer gut on the Michael Jordan statue outside the United Center.

3) Convince Brett Favre to sign a one-game contract with the Bears.

5) Sing “Take Me Out To The Ballgame” in the stands between the third and fourth quarters.

1) Start a donation fund to help Packers team buses pay for the $10,000+ in tolls on the Eisenhower Expressway.

2) Put a Cheesehead, big dirty beard, and beer gut on the Fonzie statue in downtown Milwaukee.

3) Get an estimate from Rod Blagojevich as to how much it would cost in cash and iTunes gift cards to have the Bears throw the game to the Packers.

4) Bring extra bottles of Miller High Llife for the Packers’ sideline, because John Kuhn runs swifter when he’s had a few cold ones.

5) Have Lavergne and Shirley beat the crap out of Balki and Larry in a pregame 2-on-2 ultimate fighting match to fire-up the Packers.
Written by The Comedy News
Category WISCONSIN
Email ThisBlogThis!Share to TwitterShare to FacebookShare to Pinterest