USA To Try Purple Finger Thing for Next Elections 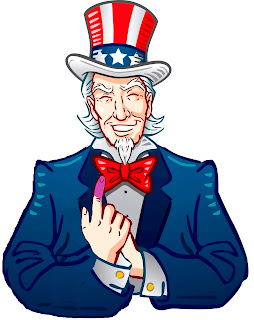 UNITED STATES OF AMERICA - (@TheComedyNews) - In an effort to stifle double-voting, the Federal Election Commission will be requiring all voters to dip their index fingers in purple indelible ink for the 2012 election.

Disability advocates have been irked by the announcement of the purple finger thing for elections in the United States, claiming that it discriminates against people who may be missing fingers.

One compassionate Republican lawmaker has devised a solution for disabled voters.   "Now, see, I am a Doctor, mmkay?"  The snarly Oklahoma Republican Senator said.   "The purple ink thing will work for all Americans, including the disabled.  In the event that a disabled voter lacks digits on their hands to mark that they voted, they will be require to dip their noses in the ink."

College students are already plotting to prank each other in the wake of the purple finger thing coming to the United States.  In politically-divided frat houses, many frat boys are planning to paint purple the fingers of passed-out drunk partiers in hopes of coning them out of their ability to cast a vote.