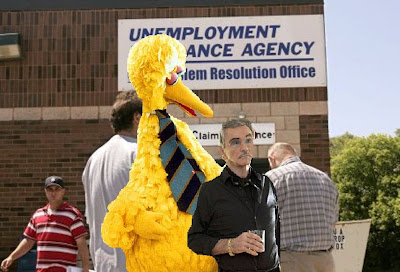 "We became pals while waiting in line for our unemployment checks," explains Big Bird, 43, who was laid off due to cuts to Public Broadcasting.  "Burt's been out of work since January when he did a brief voiceover on Archer."

Big Bird explained that in addition to being unemployed, he recently had a big fight with one of his long time friends Snuffleupagus.  Snuffie (as his friends call him) recently changed ideologies, as he was paid personally by Republican Mitt Romney to be a live-action mascot for the Republican party.

"Snuff, that turn-coat prick.  I hope his new friend Mitt Romney pins him down and shaves his bloated elephant-freak body," huffed Big Bird, while lighting a cigarette at the Midtown Manhattan Unemployment Insurance Agency.  "I'm not bitter, I have a new pal, he's just as unemployed and washed-out as me.  Burt Reynolds!"

Reynolds admits that he is enjoying his new friendship with Sesame Street's friendliest bird.

"Bird's a good guy.  Or girl, not really sure.  Frankly I don't really care.  He's good shit, keeps me company. Ya know, in line and stuff," said Reynolds.

Later in the day, Big Bird and Reynolds purchased sunflower seeds and Jameson, which they consumed while making rude passes at park-goers in Central Park.

Written by The Comedy News
Email ThisBlogThis!Share to TwitterShare to FacebookShare to Pinterest