Girl on Vacation Not Sure If Her Friends Are Jealous Yet

CABO SAN LUCAS, MEX. - (@The Comedy News)  Stacey DiPalo, a senior at Arizona State University has been spending the last week in Cabo San Lucas with two of her friends from high school.

But the last three days have been a bit confusing for the 20-year-old sorority girl:  she is not quite sure if her friends back home are jealous of her vacation yet. 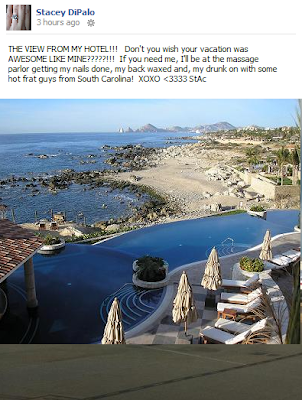 "The first day we were traveling to Mexico, my friends were like, liking the shit out of my status updates," describes Stacey, referring to her check-in on both Facebook and FourSquare at Sky Harbor International Airport. "But since I arrived I haven't received a single like from like anyone.  Maybe there's like a time difference or something?"

Cabo is only one hour ahead of Tempe, Arizona, where Stacey's friends still at school seem to be ignoring her social media updates from where she refers to as, "Piña Colada Paradise".

Today, Stacey posted a photograph of the view of the beach from her hotel, her breakfast of huevos rancheros and avocado, and a picture of Stacey doing body shots with what appears to be Detroit Lions quarterback Matt Stafford.  But to Stacey's dismay, there wasn't a single comment or like.

"I think people may have forgotten that I am on vacation #jealousofme," Stacey tweeted to her 147 followers.  "Instagram me at StaceyFacey for pics of me getting humped by a Dolphin!  A Dolphin!" Stacey wrote 23 minutes later.

Calls to Stacey's friends about whether they were jealous of Stacey's vacation posts just yet were not returned.  Stacey has advised reporters that this might be a sign of jealousy.

****UPDATE****
Stacey's Facebook friend list has dropped by 13 in the past four days, leading Stacey to believe that indeed her friends are jealous of her vacation posts.
Written by The Comedy News
Category WORLD
Email ThisBlogThis!Share to TwitterShare to FacebookShare to Pinterest