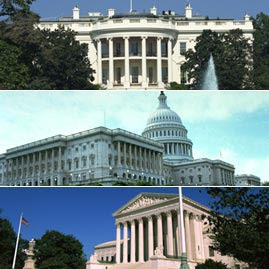 (The Comedy News) - Only one day before the mid-term elections of 2010, Democrats are gearing up to pack up their desks, as most experts are predicting that they will lose control of the House, Senate, and Presidency.

After two years of complete control over Congress and the White House, Democrats have lost so much of the public's confidence that unprecedented electoral losses will ensue.

Even though President Obama is not up for re-election until 2012 (hence, 2010 being "mid-term" elections), ballot boxes nationwide are filling up with votes to replace the 44th President with a more conservative, vindictive, less articulate commander-in-chief.

It is not all losses for the Dems, however. Although the Dem losses in the House and Senate likely be fair and square, the constitutionality of voting out a President after two years by stuffing ballot boxes with snarky comments is coming under legal scrutiny. Because of this, Democrats are very likely to pick up seats in the Supreme Court.

Once again, since Supreme Court Justices are not directly appointed by the voters, the Dem's reclamation of a majority of liberal Justices on the Supreme Court via direct election will reinforce the complete and total political quagmire that will dictate American politics for the next 730 days.