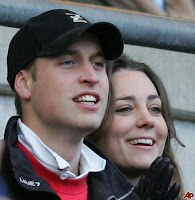 
LONDON, UK - (@TheComedyNews) - A day after officially announcing his engagement to longtime girlfriend, Kate Middleton, Prince William Arthur Philip Louis of Wales remarked that he is eagerly anticipating taking on a last name.

"Kate and I have been discussing my frustration with my grandiose name for quite some time now," said the groom-to-be, grinning and lightly tugging on Kate's pony tail. "We even found lost journals of past princes, kings, and other antiquated rulers of England who expressed profuse yet secret distaste for having a five-piece prepositional royal name. So to go along with our wedding, I will be dropping the 'Arthur Philip Louis of Wales' part, and will be replacing it with just 'Middleton'. Prince William Middleton. My 28 years of five first names and a prepositional phrase are finally over."

The father of the groom, Prince Charles had a more menacing suggestion in regards to his son's surname change.

"My eldest son has a last name, and it's Windsor. We Windsor's just prefer not to use our last name, and we're entitled to doing that, after all, we're royalty. But if Willy prefers mutiny, he should take out the 'Prince' from his name too," sneered Prince Charles. "'Cuz he sure-as-Shakespeare won't be welcome under the roof of my Windsor Castle with that...plebeian name---'Middleton'. Harrumph, I say."

Prince William also noted that the 'of Wales' part would have been too deceiving to the public --- particularly because he and Kate plan on moving to Los Angeles.
Written by The Comedy News
Category WORLD
Email ThisBlogThis!Share to TwitterShare to FacebookShare to Pinterest