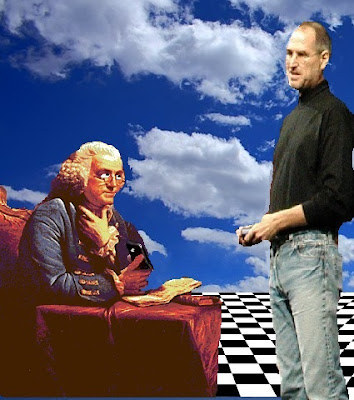 KINGDOM OF WEST HEAVEN - (@TheComedyNews) - Only a day after entering the afterlife, Steve Jobs has been befriended by another well accomplished, yet dearly departed innovator---Benjamin Franklin.
"This i-Phone device is wondrous!" Franklin exclaimed to his new buddy, Steve Jobs.  "I must say I am thoroughly impressed.  Now I must inquire, can I use this [long pause] i-Phone to find lovely lasses to come hither following nightly gatherings at Mozart's domicile?"
Jobs was quick to address the inventor's question.  "Benji, the iPhone is great for contacting all of your friends, loved ones, and mistresses, if you do so choose."
Several of heaven's greatest inventors, scientists, and artists lined up one by one to catch a glimpse of Heaven's newest resident and perhaps the most influential individual of the computer age.  Some eternal blogs have has reported sightings of Leonardo DaVinci, Albert Einstein, Johannes Gutenberg, and Aristotle.  After learning of Jobs' arrival in the afterlife, many of the figures quickly lined up at the eternal warehouse to get their hands on an iPhone.

Issac Newton was spotted repeatedly dropping his newly-acquired Apple iPhone under a tree, and attempting to make a big deal out of it.  Everyone else just thought Newton was being a crazy heretic again.
Later in the day, Jobs was seen playing hacky sack with jam rocker, Jerry Garcia.  The two reportedly talked about activism-networking using a series of Applications on the iPhone.
There were also rumors of a special keynote event hosted by Jobs in the coming weeks.
"My new pal Benjamin Franklin and I have a special announcement," Jobs announced over the Heaven soundsystem.  "Benji and have partnered up and will be showcasing a series of Apps that will help all of us in the Kingdom of Heaven on our daily activities."
On their morning radio show, Michelangelo and  Freddie Mercury speculated that one of the apps is called iHaunt---an application that assists the living-impaired with sending cryptic, spooky messages to the living.  Another app is called StudyPartner---an app that assists Heaven residents with keeping track of their living-loved ones' school work so they can better answer their prayers for better grades.
Subscribe to TheComedyNews.com on Facebook
Follow TheComedyNews.com on Twitter
Written by The Comedy News
Category SCI / TECH
Email ThisBlogThis!Share to TwitterShare to FacebookShare to Pinterest