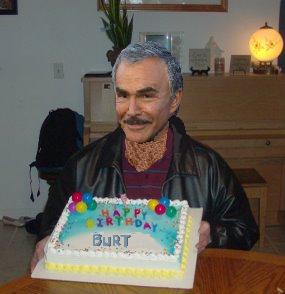 Clutching a Talkboy tape recorder he purchased as a birthday gift to himself using his Amazon Prime account, Reynolds tried to recall quotes from his eclectic resume of film roles.

"Heh, what comes after 'L'?  Bow!  Get it?  Elbow!  Heh heh," Reynolds recited into his tape recorder, a quote from his role as detective Nick McKenna in the children's buddy-cop film, Cop and a Half.

As Reynolds attempted to recall quotes from one of his most famous films, Deliverance, all he could seem to remember was the dueling banjo theme.

Later on, Reynolds took a moment to have some birthday cake which he had delivered to his apartment.  At that moment he made a discovery that was so astonishing to himself, he recorded it on his tape recorder.

"Reynolds Rap.  Heh, it's plastic, and uh, keeps my cake moist and fresh," he chuckled to himself, with the tape recorder recording.  "But it's my cake and my plastic wrap, see, Reynolds wrap.  I'm Burt Reynolds, and this is Reynolds wrap.  Muah ha heh!"

Following his birthday cake break, Reynolds took a seat in his recliner and turned on what he thought was his television, but was really his microwave.

Eventually, Reynolds found his actual TV and flipped through the channels.  Upon first settling on watching The Simpsons, Reynolds began a melancholy rant of regrets into his tape recorder.

"Gosh, I've been divorced so damn much.   I wish I could have married Marge Simpson.  I'd change my name to Burt Simpson.  Mah hah!  Like Bart but Burt.  That's funny.  Don't have some cow, man!  Ha ha!"

After his laughter subsided, Reynolds changed the channel to TBS, where he began to watch the Tom Sellick film, Three Men and a Baby.

As he sat watching the film, Reynolds spoke into his tape recorder again.  "Ah, bully.  This three guys and a baby movie was so much fun to make.  Really proud of this.  I don't know why I didn't get an Oscar nod for my lead role.  Lousy lame Grammy Oscar Academy."

Reynolds relaxed a bit as he watched the rest of Three Men and a Baby.  But his relaxation turned into confused fury as the end credits began to roll.

"Uhh they spelled my name wrong.  Yup they spelled my name wrong, T-O-M is not how you spell Burt.  And Reynolds is not spelled S-E-L-L-E-C-K either," Reynolds screamed into his tape recorder, not realizing that he was once again confusing another 1980s mega-mustached actor, Tom Selleck, with himself.  In a huff, Reynolds picked up his telephone and dialed 9-1-1, where he recorded his side of the conversation.

"Ah yes operator.  This is Burt Reynolds, I am watching one of my movies on TV and the end credits spelled my name wrong.  I think, uhh, all the letters are wrong.....Yes, this really is Burt Reynolds....  No no no, Turd Ferguson is not my name.  That was just a bit on Saturday Night Fever.....  Yeah, that Chris Farley sure did a great impression of me....okay I'll hold, but not too long, the movie credits are almost done and I'm running out of cassette tapes."