Song-Clapping at Shabbat Services All Over the Damn Place 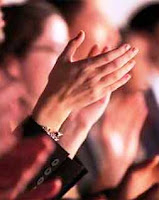 BRENTWOOD, CA - (TWITTER: @The Comedy News) - The congregants at Temple Beth Raash (בית רעש) in Brentwood, California have been running into some musical mishaps for the past few Friday nights:  the congregants can't seem to clap at the right moments.

"We have tried in vain to get our audience to clap together and on time," lamented Rabbi Steven Zembrowsky.  "I have had three different Cantors quit on us in the past year.  One even stormed out shouting about how she should have never converted from southern Baptism."

During song sessions, congregants singing along with the Rabbi and Cantor can hardly seem to clap at any of the right moments, rather, are just making lots of white noise that drowns out the amplified service-leaders.

Typically, the Rabbi will lead the service along with a Cantor strumming a guitar.  These days, however, the Beth Raash song-leaders can barely recruit a Cantor who can mash a tambourine without becoming frustrated with a beat-illiterate audience.

Temple Beth Raash has brought in consulting firm Booz and Company to study how the songleaders can get congregants to clap at the right moments.

After a three hour study, analysts concluded that the biggest musical gaffes tend to occur towards the end of services, particularly during the chanting of "Oseh Shalom".

"Honestly, they've got a long way to go," notes a senior Booz consultant specializing in Religious Song Cohesion.  "And according to an Apollo Theater-style survey, the only people that really care about this are the Rabbi, the Cantor, and five or six posturing musical has-beens in the audience.  Everyone else is quite jolly clapping off-beat and wrong."

Still, Rabbi Zembrowsky is quite miffed by his congregation's musical malignity.

"These days," scowled the Rabbi, "I can barely do the eye-cover thing during the Shemah.  I just stand with my hands on my hips, head down----embarrassed."