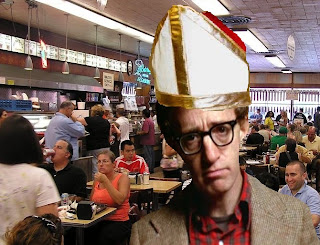 VATICAN CITY - (@The Comedy News) - One-hundred-and-fifteen Cardinals have gathered in the Vatican City and selected the first Jewish Pope in the  two-thousand year history of Catholicism.

Woody Allen, a Jewish filmmaker from New York City, has been appointed the replacement for His Holiness Emeritus, Benedict XVI.

Although this is an unprecedented move by the Vatican, the first Pope, St. Peter, had a fairly positive relationship with the Jewish people during his reign, according to primary sources.

The world's first Jewish Pope has selected his "Pope name", which will be Pope Portnoy IX.

Pope Portnoy IX could not be reached for comment, because he was deeply engaged in a conversation with his Mother:

"For the last time, Ma, I'm not going to be a doctor," Pope Portnoy IX screamed into his white iPhone 4S.  "No, Ma.  I'm sure she is a nice girl, but there's no point in you introducing me.  Well, this new gig I got has some rules, goddammit."

Pope Portnoy IX's assistants have released a list of changes that he will embark upon for the remainder of his lifetime appointment as the first Jewish Pope:

--Midnight Christmas Mass will be relocated from the Vatican to Katz's Deli.  This will be followed by an early morning Christmas Day Chinese buffet lunch with the local Cardinals, and a Papal Mission to the nearest Regal Cinema.

--Christmas will now focus less on Jesus' birth, but rather, more on his Bar Mitzvah, twenty years before his death at age 33.

--Pope Portnoy IX will donate his elaborate white outfit to charity, and instead wear a 20-year-old suit that spouts a plume of dust whenever a colleague pats him on the shoulder.

--The trademark over-sized hat will be retired and replaced with a red over-sized Kippah full time.

--In an Easter/Passover hybrid, the Afikomen will involve having bunnies find a hidden slice of Matzah.

--The Communion cracker will come with lox and shmear.

--All sex scandals will now involve Shiksas (18 and older) with tattoos.

--The Pope Mobile upgraded to something safer, like a Volvo.