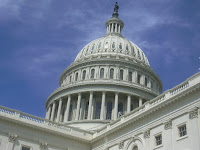 Senate Votes 61-39 to Repeal "No Term Limits, No Progress" Law


WASHINGTON, DC (The Comedy News) - The US Senate has eliminated a 223-year-old law that forbids Congress from instituting term limits on itself.

The Once Is Enough Act of 2010 was passed 61-39 in the most topsy-turvy bipartisan vote since the declaration of war with Grenada. There were 44 democrats and 17 republicans that voted in favor of the bill that would repeal the law granting unlimited terms for elected members of the House and Senate.

"Today, we are not Republicans versus Democrats, rather we are honest statesmen versus egotistical elitists," exclaimed an anonymous Senator from Oklahoma.

The elimination of unlimited terms for Congress will result in significant changes to the political world. No longer will members of the House and Senate be plagued with the burden of re-election influencing their voting record. Instead, the insincere double-speak will now have an ending point: election day.