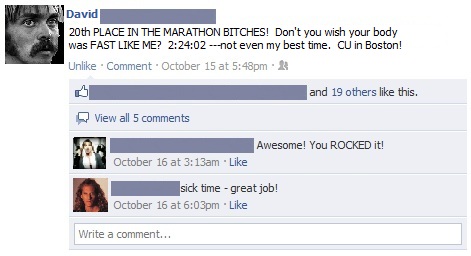 WASHINGTON, DC - (@The Comedy News) - Following the running of the Marine Corps Marathon on Sunday, the entire internet briefly crashed due to the millions of overtly boastful status updates by proud marathon runners.
"20th PLACE IN THE MARATHON BITCHES!  Don't you wish your body was FAST LIKE ME? 2:24:02---not even my best time.  CU in Boston!" Updated one very proud Marathon finisher.
The 20,000-plus runners in the Marine Corps Marathon this year produced and estimated 10 million statuses, emails, and Tweets boasting about their athletic prowess---an average of 500 per runner.  As the marathon went on throughout the morning, social Media outlets reported unprecedented overloading of their systems due to the massive influx of bragging and put-downs.
But runners are not alone in overloading the internet with their obnoxious bragging.  Football players, golfers, fencers, swimmers, and the asshole down the street who just wanted to remind you that he lost his ninth pound and ate organic goat balls for dinner are all contributors to polluting the internet with excessive zeal.
"Kiss my ass, internet!  I don't care how slow you get, I will remind you every goddamn day just how often I go to spinning class," Abby Kauffman of West Chester, New York Tweeted after reports of the internet crashing due to widespread self-aggrandizement.
Engineers at Facebook, Google, and Twitter are all working to devise algorithms to limit athletic accomplishment boasting to a maximum of 12 statuses or Tweets per year--an average of only one per month. All three social media giants have adopted a new banner at the top of their webpages, "Please Be More Modest, or Risk Losing Your Internet".
A similar algorithm has been considered to curb the excess of status updates about vacations that seem to cause the internet to crash around the time of spring break and winter holidays.  However, the social media outlets have backed down from these talks due to pressure from the National Association of Burglers, as well as the Foundation for Frat Boys and Sorority Girls United Against Being Pleasant.