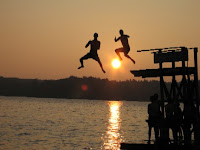 DENVER, CO - (@The Comedy News) - Sarah, Moishe, Rachel, Jeremy, Eric, Stacy, David, and Sara: if you are so privileged to eclipse their exclusive circle of kinship, you will learn obnoxiously quick that these eight 27-year-olds have been friends since Jewish summer camp.

Sarah, Moishe, Rachel, Jeremy, Eric, Stacy, David, and Sara---currently in their eighteenth year of inside jokes and incest---living together in squalor on the outskirts of a nauseatingly youthful Colorado ski-town.

The clique that calls themselves the "Excellent Eight" have known each other since what they have referred to as the summer of love, 1995.  Then, they went to a Jewish summer camp called Camp Khazir deep within the Ozarks of southern Missouri.  They still go back to Camp Khazir every year to re-live the glory days of when they were all ten.

"Khazir!  Khazir!  My favorite time of year!  Khazir! Khazir!  Excellent Eight we cheer!"  A few of the summer camp friends broke into song during the interview, unprovoked---making reporters visibly uncomfortable.

Outsiders that have had the misfortune of knowing this stubbornly secluded self-righteous posse note that the Excellent Eight are always together.

"They took all of the same classes together at Colorado-Boulder.  Not sure if they even graduated, but they were definitely in the same classes, cheating off each other," describes a college classmate.

A former director of Camp Khazir notes that the Excellent Eight have made a name for themselves throughout the entire Jewish community.

"I once told someone while vacationing in Ethiopia that I did a summer at Camp Khazir back in 1997," says the former camp director.  Without fail, the guy I was speaking to immediately asked, "Oh, so you know those Excellent Eight brats?"

Another camper describes their temperament.

"Just by looking at them, you can tell that they've all hooked up with each other, or at the very least, seen everyone in their intolerably smug clique naked," describes a former co-Camper, who stopped attending camp in 1999.  "We confirmed that they just pass each other around.  When Eric or David or Jeremy or Moses or whoever one of those caricatures of each other pulled out an acoustic guitar on the lagoon pier and sang a song full of inside jokes about getting to third base, that's when we knew for sure.  And who even talks about their bases anymore?  New rule:  if you're old enough to drive a car, you may not refer to hooking up progress in terms of baseball hits."

The song is supposedly on YouTube and will be featured on Tosh.O this spring.

A private investigator hired to study the Excellent Eight has concluded that none of the eight charter members have made any new friends outside of each other since the Clinton Administration.  And although no one is quite sure which member of the group is Sarah with an "H" and Sara without and "H", they both can be identified by their frequent wearing of a puffy-painted tank-top shirt that reads "Sanctuary Sex".  It is believed that the shirts are a reference to a sexual escapade that took place while neglecting their duties as senior counselors--jobs they resume every June.

Sarah, Moishe, Rachel, Jeremy, Eric, Stacy, David, and Sara.  Because there is plenty of endless drivel about Jewish summer camp to share, after all these years.
Written by The Comedy News
Category RELIGION
Email ThisBlogThis!Share to TwitterShare to FacebookShare to Pinterest