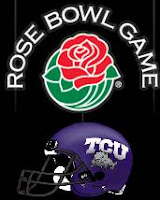 
MADISON, WI - (The Comedy News) - Immediately following the official announcement of their invitation to the Rose Bowl game, thousands of Wisconsin Badgers football fans looked to Wikipedia to get information about the Badgers' opponent, the Texas Christian University Horned Frogs.

"I'm going to the Grand Daddy of 'Em All, the Rose Bowl!" Rejoiced Darren Holland, a sophomore at the University of Wisconsin-Madison. "Whenever the Badgers football team takes the field, it's my duty as a fan to be the most clever, cunning, condescending jerk to the opposing team. When I found out Bucky and the Badgers were playing TCU, I wondered, 'well, they're Christian, they're from Texas, their frogs have horns on them. That could be enough for a vulgar t-shirt and some acrostic poems for poster signs at the game, but I better do some more research.' So like the rest of Badger nation, I went to the most comprehensive source of info: Wikipedia."

Since Texas Christian University is a member of the mediocre-at-best Mountain West Conference, its prominence in the national spotlight has been limited. Wisconsin has proudly been a meddling member of the Big Ten Conference, a highly-competitive and decorated athletic powerhouse known for its ruthless and oftentimes cannibalizing lampoonery of any challengers.
Top Five Must-Know TCU Facts for Wisconsin Football Fans:
Subscribe to TheComedyNews.com on Facebook
Follow TheComedyNews.com on Twitter
Written by The Comedy News
Category EDUCATION, SPORTS, WISCONSIN
Email ThisBlogThis!Share to TwitterShare to FacebookShare to Pinterest