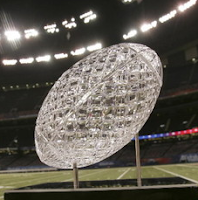 It is no surprise which teams are at the top of the new US News & World Report college football poll. The teams strewn throughout the top ten have their own arbitrary and bias-laden reasons to consider themselves the perennial contenders for the National Championship in college football:

1) Princeton Tigers - The top ranking football team for 141 straight seasons due to generously offering to host the first college football game ever.

2) Cal Tech Beavers - Drawing up plans for renovations to the Rose Bowl Stadium will keep the Beavers in top contention as long as the USC engineering department doesn't get the final contract.

3) Michigan Wolverines - The maize and blue are is consistently the only Midwestern college football team that the east coast will acknowledge.

4) Harvard Crimson - Now what would be a US News & World Report list without Harvard in the top 5?

5) Pennsylvania Quakers - The Quakers gridiron gang gets really fired up when you confuse them with Penn State.

6) Oxford Dark Blue - The top rugby club in all of Europe can definitely make a run at the National Championship if they can withstand the weekly jetlag and learn distance in "yards".

7) California Golden Bears - The team is like, so chill, man.

8) Yeshiva Maccabees - They are the only college football team to be undefeated on Saturdays. The coaching staff encrypt their playbook by writing right-to-left.

10) Ole Miss Rebels - Between William Faulkner's Nobel Prize-winning literature and Michael Oher's story taking place here in The Blind Side, the Rebels are a academic-football-tearjerker powerhouse.

-By High Neesniffer
Written by The Comedy News
Category EDUCATION, SPORTS
Email ThisBlogThis!Share to TwitterShare to FacebookShare to Pinterest