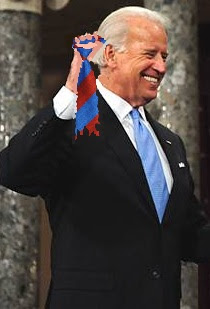 WASHINGTON, DC - (@The Comedy News) - Vice President Joe Biden came to the U.S. Senate floor today to exude his only real Constitutional duty-- to break ties in the Senate. However, he chose to interpret his Constitutional duty as he had to literally take a necktie and break it into pieces.

When the Vice President arrived on the floor and silently grinned his trademark smile, he pulled out a brand new red and blue-striped necktie and proceeded to break it into pieces with his bare hands.

"Once that tie came out of his pocket, we knew exactly what ol' Joe was gonna do", a Senate Page reported. "We hear stories about how much of a goof he was when he was a Senator. And now, out of forty-seven Vice Presidents in U.S. history, Joe is the first that I know of to come to the floor and rip a tie to pieces---and then defend his behavior as his 'Constitutional duty'.