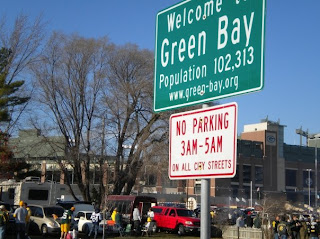 GREEN BAY, WI - (The Comedy News) - Following the Green Bay Packers' first Super Bowl win of the new millennium, the largest producer of maps of the United States is considering adding the town of Green Bay, Wisconsin to all of their future maps.

"We at Rand McNally believe that the time has come to recognize Green Bay on all of our maps," commented a Rand McNally spokesman. "For many years, we thought that if we let Green Bay appear on our maps, that would set off a domino effect, and before you know it, we would have to add every total joker loony toon city to our maps like Omaha, Springfield, and Seattle."

With a population of only 102,313, Green Bay is the smallest media market in professional sports. Despite these setbacks, the Packers have remained in Green Bay since 1921. Such an anomaly has caught the attention of Rand McNally, and is thus why Green Bay has now found its way onto a map for the first time.

The first Rand McNally map featuring Green Bay Wisconsin will be unveiled at Lambeau Field this Wednesday morning.  About 20,000 enthusiastic Green Bay residents---all claiming to be an owner of the Packers--- have already begun to stake out the best tailgating spots to get drunk and eat brats before the "Green Bay Is On The Map" ceremony.