[Text of Craigslist posting below]

Reply to this Posting
In the fall of 1985, I was at the Glencoe police station awaiting drug charges when I met you, yor name is Jean -- you were wearing a salmon-pink button shirt with black spandex pants, wavy curly chin lenth hair.   You had a humongous nose, but that's your best feature, so adorable.

We talked about your problems, your hatred for your bother, and some sick local kid that I presume succumbed to his illness sometime ago.  anyways, you and I made out heavily  in that police station lobby for a little bit until your crazypants mom picked you up.

I've been hoping that one day we could meet again.  But alas. 25 years have come and gone and I haven't seen you so im resorting to this.

I live in California now, and IM FILTHY RICH!  We should def hook up again, I would love to take you out for dinner and speedball and a motorcycle ride.

Hope you this posting finds you.  If anyone else reads this, please look at the sketch i drew of Jean and let me know if youve seen her.   Miss you jean! 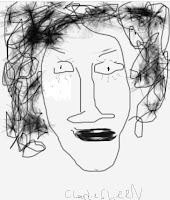 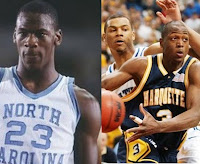 NEWARK, NJ - (The Comedy News) - NCAA officials have confirmed that Michael Jordan and Dwayne Wade will be playing in the Sweet Sixteen basketball tournament match-up between Marquette University and the University of North Carolina this Friday in Newark.
"We at the NCAA were approached by both Michael [Jordan] and Dwayne [Wade] about coming back to the Marquette University Golden Eagles and and University of North Carolina Tar Heels.  We all agreed that having two legends coming back to college ball for just one game will be great for the sport, and even greater for advertising revenues," announced an NCAA official.
This game will be Michael Jordan's first try at college basketball in 27 years. "All I gotta say is, I'M BACK!"  Announced an excited Jordan from his home in Charlotte.  "I'll be back in Chapel Hill to party it up each night this week.  I've only got 3 days to get back into my college training routine!  I'm pumped to bring that #23 Tar Heels jersey outta retirement."
Dwayne Wade's return to the Golden Eagles' starting line-up wasn't an easy decision for the 7-time NBA All-Star.  "This is gonna be a blast.  Me and MJ, back playing for our schools," rejoiced Wade at a press conference.  "Although, now that I think about it, I should probably tell [Miami Heat] Coach Spoelstra and Pat Reilly.  I'm supposed to be in Miami at that time to play the Sixers.  Eh, whatevs."
*****
Subscribe to TheComedyNews.com on Facebook
Follow TheComedyNews.com on Twitter
Written by The Comedy News
Category SPORTS
Email ThisBlogThis!Share to TwitterShare to FacebookShare to Pinterest 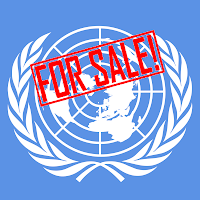 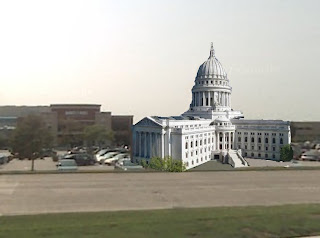 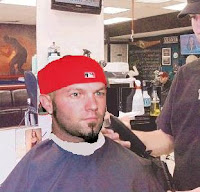 JACKSONVILLE, FL - (The Comedy News) - The former front man to nu-metal band Limp Bizkit was finally located this week as he celebrated the ten-year anniversary of one his most eclectic songs.
Fred Durst was found this week celebrating the tenth year since the release of the song "My Way" (video) at Ritchie's Barbershop in Jacksonville, Florida.  A quick glance confirms what most assume about Durst's recent whereabouts:  he's doing basically nothing, and wearing a backwards red hat.
"He comes into the shop each day this week and asks for the Mike 'The Situation' cut," explained barber Ritchie Roberts.  "Since March 6th, he routinely walks in, physically removes a customer who's in the chair, and then takes a seat.   He'll ask for the Situation cut, yet never removes the dumb red hat.  Just sits there and mumbles to himself, 'check-check, check-check, check out ma melody.'   It's really irritating."
Ten years ago this week, "My Way" by Limp Bizkit was the #1 rock song on the billboards.  These days, it gets no playtime.  Capitol Hill insiders hint that "My Way" is so irreputable that the House of Representatives might pass a unanimous resolution to commemorate the song's cultural value to society.  Bloggers speculate that the song helped motivate President George W. Bush through some of his toughest decisions in 2001.
Flash forward to 2011, and Durst is only a nuisance to the few that he approaches.  Unfortunately for Ritchie Roberts and his barbershop staff, they happen to be some of those unlucky few.
"He doesn't even pay.  Just walks outta the shop mumbling, 'keep on rollin, rollin, rollin'", lamented the barber.  "Next time, I'm gonna do society a favor and shave "Huge douche" on his head.  Durst probably won't even notice".
*****
Subscribe to TheComedyNews.com on Facebook
Follow TheComedyNews.com on Twitter
Written by The Comedy News
Category MUSIC
Email ThisBlogThis!Share to TwitterShare to FacebookShare to Pinterest 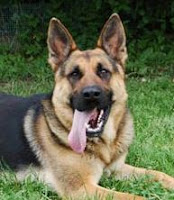 CHICAGO, IL – (The Comedy News) – A Chicago Police Department bomb-sniffing dog  will stand trial this week for intentionally accusing innocent commuters of carrying malicious explosives.
Kermit, the 3-year-old German Shepherd originally from Oak Park, is being accused of alerting authorities of suspicious bags containing explosives, when in reality, all Kermit had been looking for was food.
“We have reason to believe that the defendant, the K-9 Kermit, barked ferociously, jumped and nipped at the bags of innocent people walking on the sidewalks of Chicago under the guise that there were harmful explosives inside,” said District Attorney Jerry Camper.   “The record will show that not only did the arrested individuals have nothing harmful in their bags, but any food items they had were devoured by Officer Kermit.”
The scandal broke when a complaint was filed with the head of the K-9 Unit by one of Kermit  deputies, Haley, a 2-year old border collie.   Haley did not explicitly say any wrongdoing by Kermit, but definitely brought attention to Kermit’s enthusiasm when nothing was found in suspicious bags except for food—typically cookies, bread, and dishes with chicken or beef.
As Kermit became more and more aggressive with the K-9 officers when the bags (with no explosives) were being handed back to the commuters, Haley would whimper and cry.   Her sulking eventually paid off with Kermit being indicted in a Chicago court---after 17 wrongful arrests.
The maximum sentence that Kermit faces is seven nights in the kennel crate, belly-rub probation for one month, and mandatory court-ordered counseling services facilitated by dogwhisperer Cesar Millan.

In addition to the $6-7 million he will make each year, there are several things Hawk required to be guaranteed in his contract before he would commit:

SPRINGFIELD, MA - (The Comedy News) - Actor Charlie Sheen has gone from making headlines in tabloids to being immortalized in the latest edition of the Merriam-Webster Dictionary.
Part of an initiative to make definitions more relevant to narrow twenty-first century minds, the Merriam Webster Dictionary has updated the definition of the word "sleazy" to reflect cultural icons and commonplace activities.
The text of the new definition of "sleazy" featuring Charlie Sheen's picture: 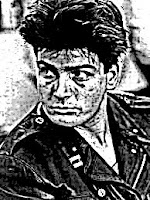 1. a lowbrow, talentless person or figure with a well-known reputation for speaking unintellectualy in the public spotlight.

3. dim quality concealed by a paternal reputation for genuine ability to act or perform, diminished due to self-destructive behavior and tendency to be unreliable in demeanor.

1974-86; (def.1) influenced by a growing resume of mainstream film roles of douchebags, jocks and too-cool-for-school bullies.

2002-08; (def. 2) evidence of saying and doing anything to have a marital partner; eventually and physically expressing unfounded contempt.

1965; ( def. 3) having been born into privilege yet defaulting to living in mediocrity---socially, professionally, and intellectually.
—Related forms

—In a Sentence
1. That sleazy actor should not be getting so much attention in the media.
2. Getting work only because your dad can do it well a sleazy way to go through life.
3. Why would anyone want to date a sleazy scumbag that beats his partners?

Written by The Comedy News
Category ENTERTAINMENT
Email ThisBlogThis!Share to TwitterShare to FacebookShare to Pinterest